Last summer, I found myself standing at the mouth of a lava tube in Washington state. The August sun was was hot on my back, but as I looked down into the cave, the cold breeze, seemingly coming from the center of the earth itself, blew back at my face. I reached up, clicked my headlamp on and sent one last glance behind me before descending into the darkness.

The first thing I saw after reaching the floor of the lava tube was a two-directional wooden sign. LEFT – LOWER CAVES. RIGHT – UPPER CAVES. I craned my neck and looked to the left. Darkness. I looked to the right. More darkness.

“Which way are we going?”

My dad squints at his phone screen, the light illuminating his face.

“Right,” he replied after a moment. He didn’t sound certain.

Nonetheless, we start our trek into the upper caves. Immediately, the previously spacious tunnel begins to grow smaller. Soon, I can touch both walls with my hands. I hush my claustrophobia with a few deep breaths.

What I’d previously thought was darkness a few moments ago seemed like day compared to the inky black we were immersed in now. The only light came from the beams of our headlamps. Despite being the “upper caves,” we found ourselves gradually descending deeper and deeper. 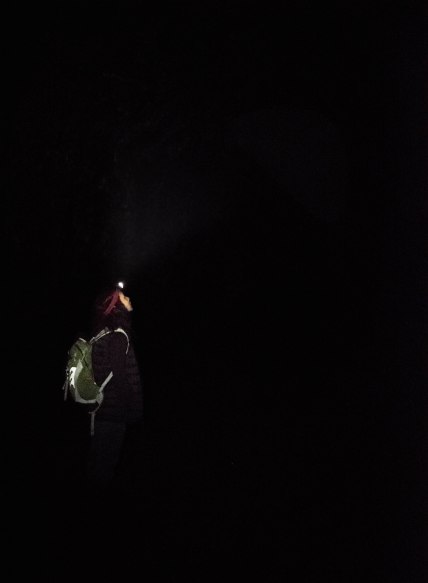 It was a constant cycling between looking down at my feet so I wouldn’t trip, and looking ahead to make sure I still saw 4 other headlamps bobbing in the darkness. It was just the five of us, alone, somewhere below Mount St. Helens.

I kept waiting for my eyes to adjust, squinting to try and make out the shape of the tunnel, but there was nothing. We decided to test just how dark it was. The five of us all turned off our headlamps.

Scary. Bad idea. I don’t recommend. We immediately switched them back on.

As we trekked further and further, the terrain got more ragged. We found ourselves scrambling over rock formations and having to boost each other up occasionally. The trickiest part was a particularly high ledge we had to climb up onto, the narrowest part of the tunnel. The Crux: a slick 8-foot tall lava fall with only one decent foothold. We all made it up, but only after quite a bit of “Try to grab onto there,” “No, there,” “Maybe you can swing your leg up and… nope,” and “Someone give me a push!” Whew.

After clearing the Crux we continued down the tube.

“Hey, how much further?” my friend Finn calls out.

We suddenly became aware of how much time had passed. We’d been walking for a solid two hours.

“Umm,” my dad replies. “The cave is only a mile and a half, so we should be coming up really soon.”

Another hour went by.

Just as we began to get worried, we caught a glimpse of something down the tunnel. It looked like a little glitter of light. Finally, we had reached The Skylight, a landmark close to the end of the trail.

The sunlight that came streaming down from the hole in the ceiling was almost blinding.

The rest of the trail was a breeze. I think we were all relieved knowing we were on the right path.

We rounded one more corner, and the exit ladder came into view.

Despite the unexpectedly long trek and the soreness in my feet, I felt a pang of sadness. It had been such a thrill wandering through Ape Cave, and I suddenly didn’t want it to come to an end. Still, a breath of fresh air was very much in order.

We climbed out of the cave, feeling the sun hit our faces. It was a pretty rad shot.

As I emerged, it was like re-entering the real world. I had almost forgotten the trees and streams that were above us the whole time.

The whole hike back, we couldn’t stop smiling.

Despite how I made that sound at some points, this was one of my favorite hikes ever (Not what you might think of when you hear a “classic” hike, but I didn’t know what else I should call whatever you do here. Scrambling? Stumbling in the darkness?). As long as you’re prepared and able to handle it physically, I highly recommend venturing into Ape Cave. It’s a truly off-the-beaten-path experience and I guarantee you’ll never forget it.

The Upper Ape Cave trail is 1.4 mi (2.25 km) one way. The trailhead can be found at the base of Mount St. Helens. The cave is the result of lava flow carving through the earth, forming a complex of tunnels underground.

Once you climb down into the cave, decide whether you want to hike the upper caves or the lower. When I visited I took the upper caves, which is a much longer, more difficult, more isolated hike. I recommend going this route if you want the full experience. If you’re up for it, take a right, which leads to the Upper Ape Cave lava tubes. To the left are the lower caves, which are a lot of fun, but won’t give you the same adventure. The lower caves are only a few hundred feet in and back (this is the path of choice for most visitors). If you decided to take the lower caves, you’ll likely see a few other travellers. If you do decide to go the upper caves, however, prepare for solitude.

Although this trail is relatively short (1.4 mi one way), plan for this hike to take several hours. Although the initial entrance to the cave is spacious enough, the tube will soon narrow out. The inside of the cave is pitch-black dark; you won’t be able to see your hand a few inches from your face. BRING HEADLAMPS. Regular flashlights won’t do; you’ll be needing your hands to scramble up a number of rock formations along the way. Bring extra batteries, too. It’s a little chilly down there, even in the peak of summer. Bring a warm jacket or vest.

The Crux is a lot easier to climb if you have some friends to offer you a hand.

After you climb out of the cave via the ladder, it’s just a quick, above-ground 1.4 mi walk back to the trailhead. It’s gorgeous and shaded with trees pretty much the whole way. This part will fly by compared to the underground portion.

This was one of the most memorable days of my life, and anyone who gets a chance to come here should definitely take advantage!